My son is 21 months old today.  I do not understand the passage of time as it relates to the growth of a tiny human.  It feels simultaneously as if he’s been this way my entire adult life and that he was born yesterday.  Maybe the day before yesterday.

I spend a lot of time talking about him and his ways on Facebook in particular.  I document his moods and behaviors in a way that I used to blog or post about myself.  And I still do – I’m still at about a 70% on the self-centered scale.  I was wondering why I feel such an urgent need to capture these little moments, share them onto Facebook.  Is it because I’m bragging? Yes, probably, but I suspect more.

The truth is that my memories of adult life are not as concrete as the ones of my childhood. I can remember details about the geography of my third grade walk to school.  I can barely remember the names of the streets I lived on in my 20s and 30s.  By barely, I mean “not at all.”  Life goes so much more quickly when you’re this age.  There’s a million and one things to do.

I’m afraid I’ll forget what his childhood was like.  I’m afraid that as time moves ever more quickly, I’ll lose this.  These are some of the most precious moments of my life, but they might not… stick in the mind.

So I document.  I relate.  I use Facebook for some semblance of privacy, but I suppose I could keep a private journal just as well.  I am proud of my boy, and I like to share what happens in my life.

Just as much as I share these anecdotes with my friends and family, I’m sharing it with my future self. I desperately need him to remember.  Sooner rather than later, he will be me. 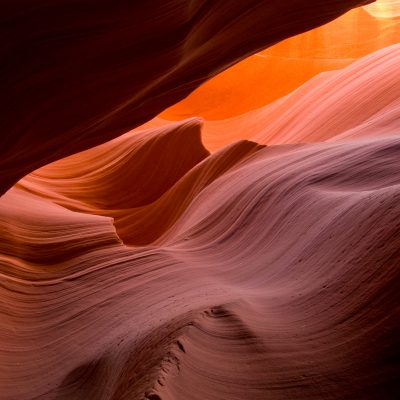 “Not by Wardrobe, Tornado, or Looking Glass” out in Lightspeed Magazine

My latest story is free for reading or listening today over at Lightspeed Magazine.  Here’s a small taste:

The silhouette of a centaur beckoned towards the gathering crowd from within the rabbit hole. In a melodious voice, she called out, “Richard! Come quickly. Without your aid, the Inkies destroy everything that is beautiful and good in our world!”

A middle-aged man in a gray business suit laughed and ran forward, the crowd begrudgingly parting before him. “Never fear,” he shouted, stepped through the hole, and pulled the door shut behind him. The lighting in the station returned to normal. The smell of flowers was replaced with the usual smell of stale urine, newsprint, and body odor. A train rumbled in the distance, perhaps soon to arrive, or perhaps not.

I first worked on this story over nine years ago.  The idea actually sprung from a character study posted on an early version of my blog.  It elicited some useful encouragement and feedback from my friends, so I tried to expand it into a full length story.  Tried, but failed.  A satisfying ending eluded me for years.

Last year, I was struggling for a new story idea that would hold my interest, so in an attempt to be productive, I looked through my files for something that could use a little tinkering.  I found this one, and I realized it still had some promise.  A few more drafts later, and I ended up with the version you see now.

What I learned here was that so long as a story still contains a spark, you should keep it around.    You might not be capable of writing the story you want  to write at this moment, but your future self may.   I have always wanted writing to happen faster than it does.  Some stories do spring out fully formed (you could call those Athenian stories).  But some require hammering on the anvil of Vulcan for years.  Maybe even decades.

Taking a longer term outlook is perhaps the prerogative of older people.  When I would young, I could barely see past the tip of my nose when it came to looking into the future.  Ironic, but not surprising, I guess.

Anyway, I hope you enjoy the story.  If you do, I hope you will subscribe to Lightspeed Magazine, which is a great source of stories every month.  I have two more stories with them coming soon, and I hope a few more still as I write them.

fiction, Lightspeed Magazine, Not by Wardrobe Tornado or Looking Glass

“Not by Wardrobe, Tornado, or Looking Glass” Out Now in February Lightspeed Magazine 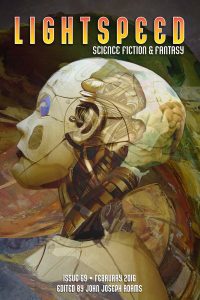 The scent of fresh lilacs and the boom of a cannon shot muffled by distance prefaced the arrival of the rabbit hole. Louisa jerked upright in her seat, and her book fell from her lap to slap against the cold pavement of the station floor. Dropping a book would normally cause her to cringe, but instead she allowed herself a spark of excitement as a metal maintenance door creaked open on rusty hinges. Golden light spilled out onto dazed commuters. Was this it? Was this finally it?

My latest fantasy short story is available for purchase in this month’s issue of Lightspeed Magazine, along with the work of other great writers such as Rachael K. Jones, Sarah Pinsker, Rachel Swirsky, Karen Tidbeck, and Christopher Barzak.  It will be online to read for free February 9th, also.  I hope you enjoy it!

I sat down with Patrick Hester at the 73rd Annual WorldCon in Spokane Washington to talk writing, web design, and more. You can give the podcast a listen over at the SF Signal website.

SF Signal is a great site for news in the science fiction literature field – if you’re not reading it already and listening to their podcasts, I recommend them.

Welcome To the New JeremiahTolbert.com

For a while now, I’ve been a cobbler’s child; “the cobbler’s children have no shoes.”  Oh, I had a website, but it was old, out-dated, and didn’t demonstrate any of the cool features that I am able to bring to bear for my own author clients.

Working between paid gigs, I’ve been putting this one together for a while, because my own writing career is very important to me.  It was time to finally give myself the gift of a new website, one that I didn’t have to feel embarrassment for.  I’m pretty proud of it, actually.  This is what I picture when I picture my ideal author website, minus a listing of a whole bunch of published books (but those will come with time).

Drop me a note if you find anything broken or odd.  I’ll likely continue to tinker with it off and on for a while.

FLASH FICTION: What Color Is This Apocalypse?

Everyone remembers where they were when the world began to end, mostly because everyone was sitting on their couch or in an office arguing with friends, family, or coworkers about the color of #TheDress.  Cultural divisions formed with startling ease over Gold/White vs. Black/Blue.  A man in Virginia was stabbed during a bar dispute, but mostly, the argument was constrained  to social media.

Scientists and journalists working together scrambled to put together uneasy explanations involving the optic nerve, visual cortex, or cones in the eye.  Nobody was fully convinced with the explanations, but within a day, the actual photo in question had faded into a series of memes and jokes. A week later, the world forgot about it, except for that geriatric corner of Facebook where your grandparents lived and you secretly suspect the speed of light is a third what it is everywhere else.

Then #TheFruit happened, and that was when we realized #TheDress was a harbinger of something much worse.  Twitter user @Bollocks13 posted a simple photo of a piece of fruit captioned: “Uh… is this a banana or an apple?”  Some viewers claimed to see a long, yellow fruit–a completely ordinary banana.  Others insisted in describing a round, bright red apple with a nub of stem.  Accusations of hacked systems flew back and forth.   “Very funny,” said Twitter user @NotMyJerb, “but this is clearly showing people different photographs.”

Experts analyzed screen captures of the image and it was found that the duality of the #TheFruit persisted even offline.  An explanation did not come easily, and the debate raged twice as loudly on the Internet this time.  A disagreement about #TheFruit led to a wife stabbing her husband in Detroit 16 times.

When people started to report see both, simultaneously, the quantum physicists got involved in the discussion.  Tests were conducted in laboratories and particle accelerators around the globe; meanwhile, battle lines were being drawn online not between those who claimed “banana” or “apple,” but between those who thought the entire controversy was an elaborate hoax and those who suspected it meant something awful.

“Our working theory is that the underlying mechanics of quantum mechanics and observational bias are breaking down somehow,” said  lead particle physicist at Cern, Fabiola Gianotti. “Evidence has come to light of additional objects that seem to appear simultaneously in multiple states — we are currently studying an automobile that appears to be a car, a truck, and a minivan at the same time.”

The breakdown accelerated from there.  Marches for peace overlapped simultaneously riots in the streets.  It’s hard to say anymore what really happened after that.

People lived and died on operating tables – medical staff were at a loss what to do with the resulting breathing corpses. The poor became wealthy, but only between blinks, and their money spent irregularly.

Our genders blurred into meaninglessness.  “From my perspective” became not just a “couching term” but a bit of reflexive language tacked on to nearly every observational statement.

“From my perspective, the bus has arrived.”

“From my perspective, the bus is a jetliner, and it just took off.”

Society survived.  It collapsed.  The sky turned puce.  Chartreuse is not a deep red; it’s a shade of yellow-green. Or is it?

I live a mostly solitary life now, like a monk.  Many of us do, among the survivors.  We cannot trust our senses, and we cannot trust that what we say will be perceived correctly by our observers.  It’s not so bad.  There is grace to be found in a state of flux.

We’ve learned to accept confusion and ignorance.  With the complete collapse of objective reality, many of the old arguments died quick deaths, or at least were made irrelevant. We think so, anyway – you must remember, these are merely opinions and they should bear little weight on how you perceive things.

Only one thing troubles me right now. I don’t know who is writing this.